Ecuador is one of the most biodiverse countries in the world, home to approximately 10 percent of global species, which vary greatly from the coastal regions to the Andean mountain range, the Amazon Rainforest to the Galapagos archipelago. Ecuador’s biodiversity draws visitors from around the world, and as someone who travels mainly for wildlife, it was only a matter of time before I was destined to visit this special country.

The main draw for me was the Galapagos Islands, one of the most ecologically unique regions on the planet and famous for its high number of endemic species. I was dreaming of blue-footed boobies, marine iguanas, giant tortoises, sea lions, and hammerhead sharks. I was craving the atmosphere found in places where wildlife comes first, and where visitors can step into the natural habitat of the earth’s beautiful creatures, watching them interact with each other and the environment with minimal human interference.

But coming to Ecuador just for Galapagos would be a shame when there are other beautiful regions to explore, each with its own unique species. So before I set out for my cruise, there was only one way to go and that was up—to the Highlands.

Ascending to 11,811 feet above sea level into the Andes, I reached a rolling landscape surrounded by volcanoes. I had arrived at Hacienda El Porvenir, a working cattle farm and sustainable agriculture ranch that produces its own milk and cheese, and grows vegetables for its kitchen. This place was the real deal: an authentic, traditional Andean experience.

My fellow travelers and I soaked in every experience, from sipping canelazo tea (with an optional side of aguardiente liqueur) and exploring the hacienda grounds, to having a captivating chat with the hacienda’s owner, Maria José. We secretly nicknamed her ‘the Queen of Ecuador’ due to her commanding yet ethereal presence.

The real magic arrived at golden hour, when we donned our zamarros (sheepskin chaps) and ponchos and plodded up a path over the hills on horseback to get a better look at our surroundings. My horse Delirium and I made a formidable pair.

We reached the hilltop and were treated to a clear view of Cotopaxi. With a picture-perfect symmetrical cone, it’s known for being one of the highest active volcanoes in the world. Cotopaxi is known for temperamental cloud cover, but this first glimpse revealed the volcano’s snow-capped summit gleaming in all its glory. I was breathless, and not just because of the altitude.

It was at the top of this hill where I received an omen, signalling my wildlife-rich trip ahead. As we were gazing at the luminous volcano, an Andean condor gave us a proper welcome to Ecuador. The majestic bird was soaring above the volcanic peaks, peering down on us as if to acknowledge our presence. Condors are one of the world’s largest flying birds, and there are only around 115 of them left in Ecuador, so this rare encounter made an impression. Even Maria José was in awe, taking photos and remarking that it was one of the most intimate condor encounters of her life. I knew it was a sign of special things to come.

Galapagos was next on my trip, and just as I suspected, there was no shortage of magical wildlife moments. Eight days aboard Enchanted Expeditions’ Beluga Yacht meant that we were treated to a wide range of sightings, starting when we woke up on the first day and saw a sea lion lounging on the stern of the boat, frigate birds soaring above, and a sea turtle bobbing its head on the water’s surface in the distance.

The sheer frequency of wildlife encounters in Galapagos is what makes it such an iconic destination. But some moments stand out more than others, including stopping by a beach known as “sea lion kindergarten” and seeing curious pups waddle and roll around, or arriving back to our boat after a land excursion to hear the captain excitedly telling us to get into our snorkel gear because dolphins were near. We bolted onto the panga (dinghy) and jumped in the ocean to snorkel alongside a pod of bottlenose dolphins, as they whistled underwater, weaving and playing around us for nearly an hour. 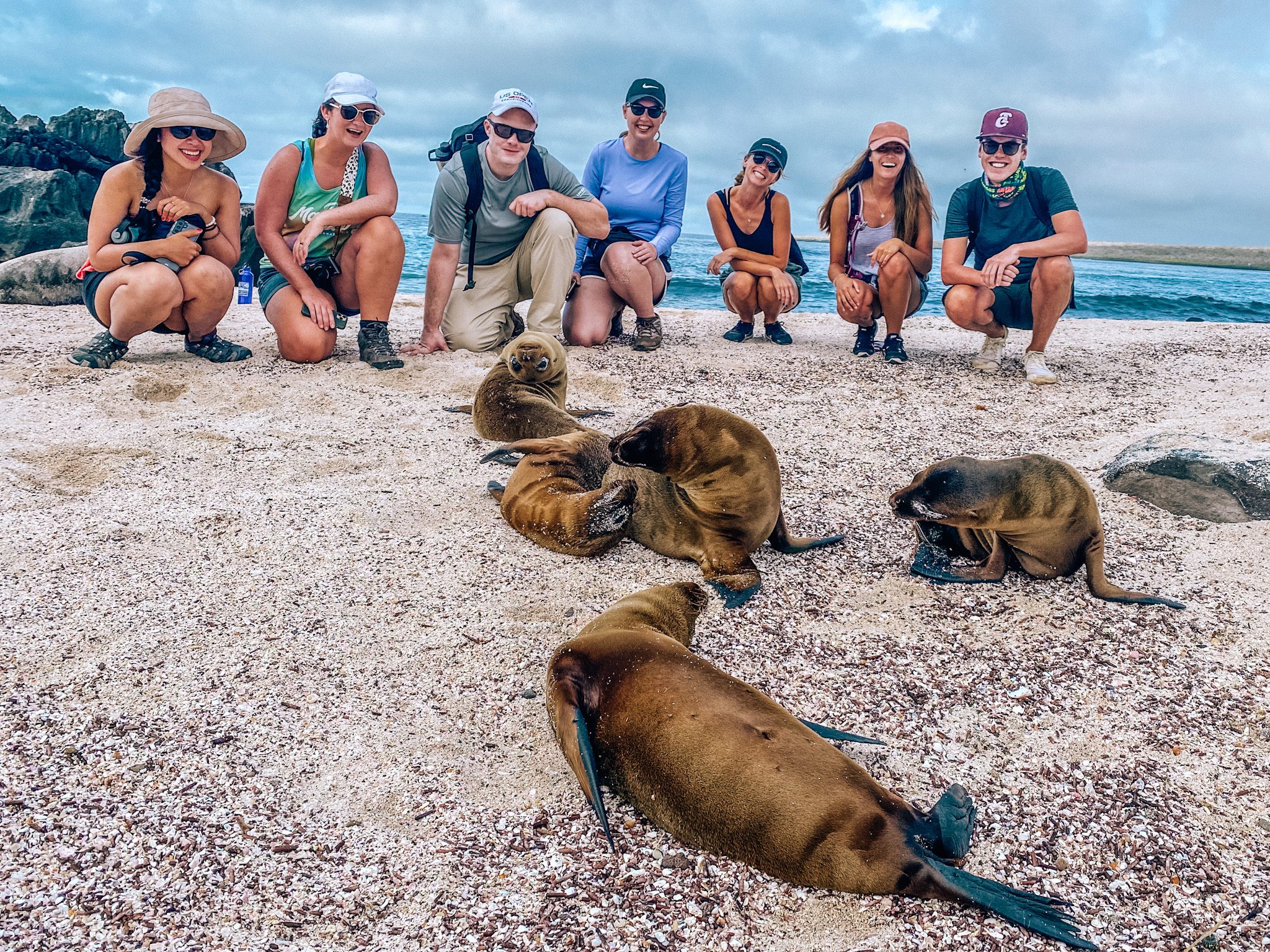 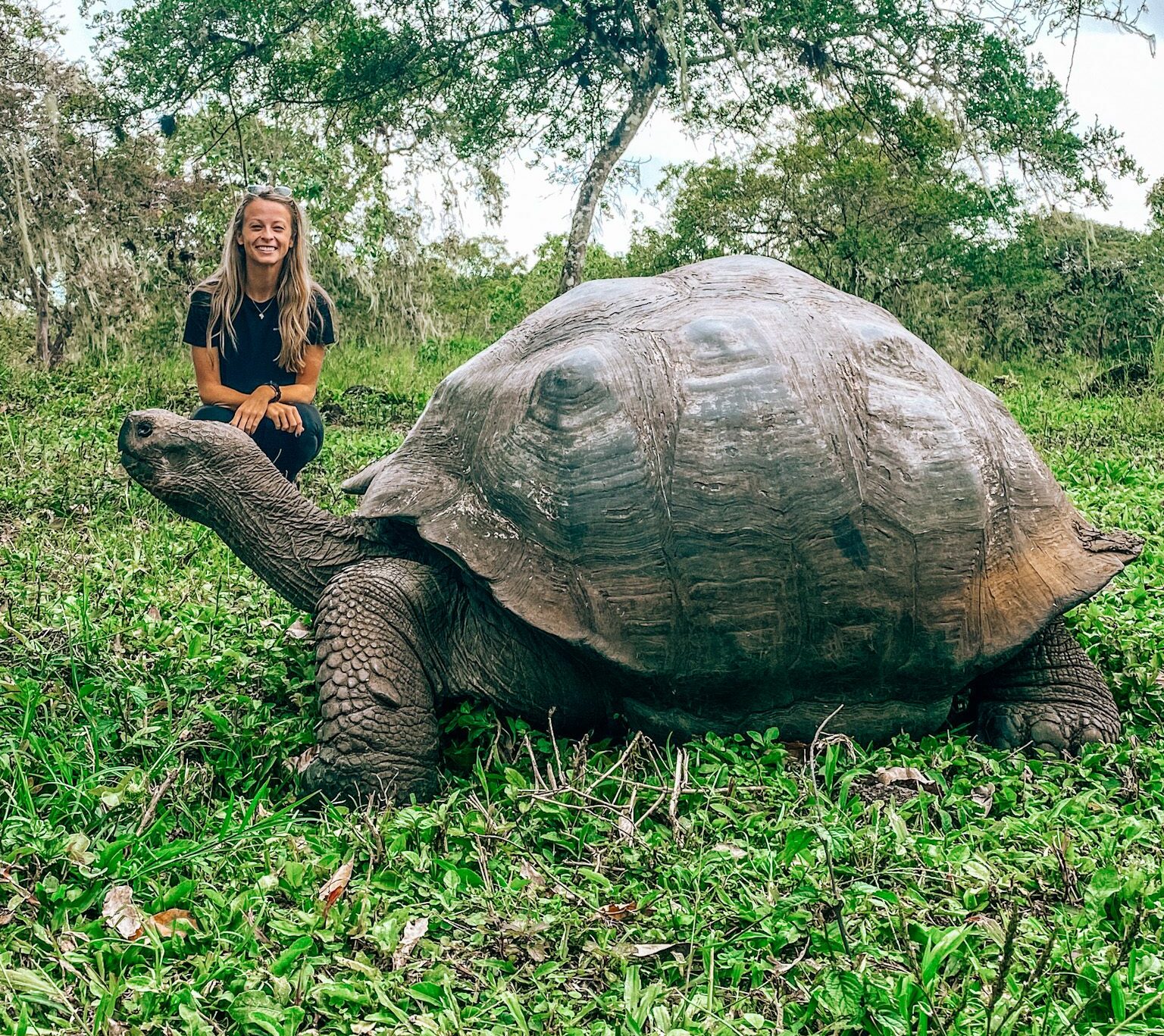 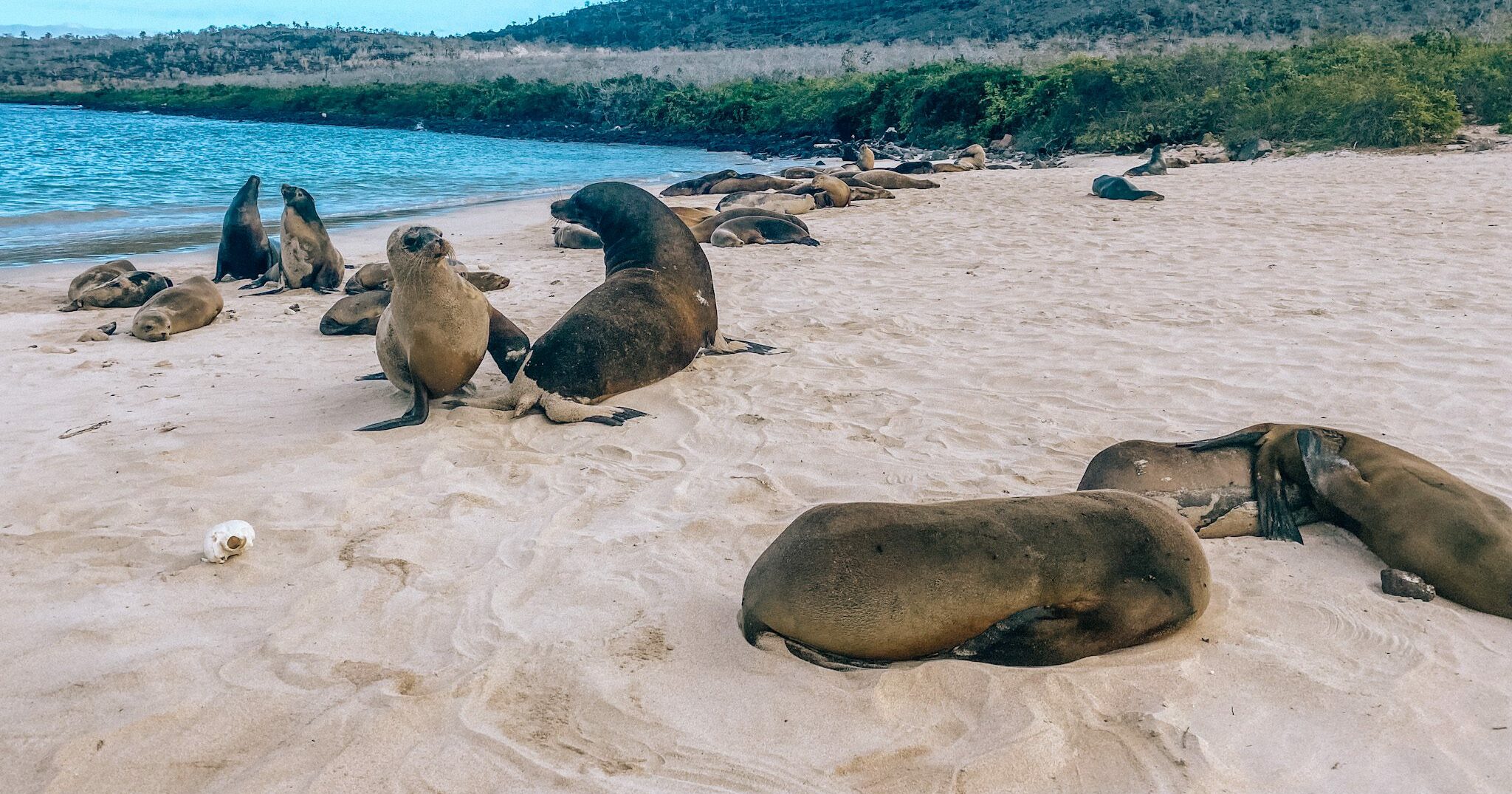 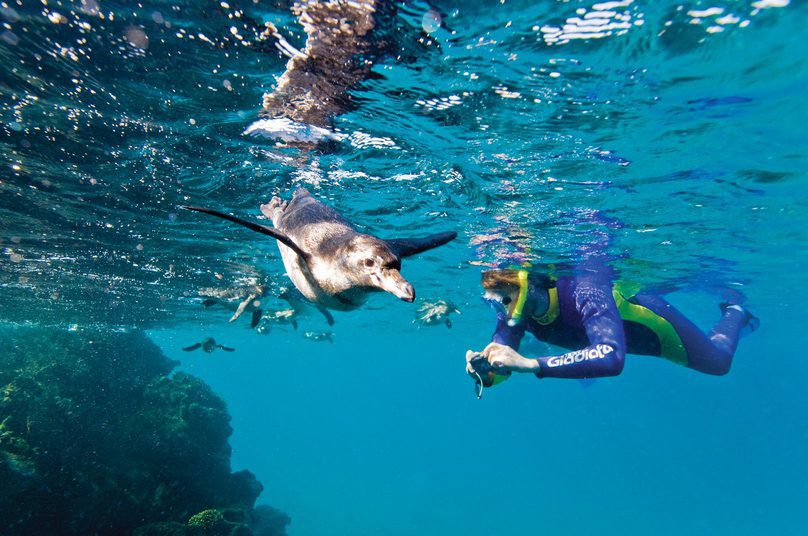 As a scuba diver, I assumed I would have to descend meters below the surface to see most of the marine creatures on my bucket list. But in Galapagos, we were able to see white-tipped sharks, golden eagle rays, spotted eagle rays, and countless turtles right from the boat.

Inspired by all the wondrous wildlife I spotted on the yacht, I stayed in Galapagos for a couple of weeks after our cruise. It was my time to decompress, relax, and absorb all the magic I had just experienced, not to mention the small marvels that occur every day on a Galapagos Island: sea lions napping on a street bench, marine iguanas suntanning on the sidewalk, pelicans swooping around the fishermen’s’ catch of the day. There is wildlife everywhere you go, but I knew I needed to go deeper to fully experience this incredible destination.

The one image I had in mind was one I’d seen many times on Instagram, the photo my friends and I had been sending to each other leading up to our trip: a group (known as a shiver) of hammerhead sharks filling the oceanic space. So when I went scuba diving, I had hammerheads on my mind. Maybe it’s manifestation, maybe it’s luck, but animal sightings seem to show up in epic proportions on my travels. When I was beneath the surface at around 65 feet, diving at an iconic site called Gordon’s Rocks, what do I see emerging out of the abyss? Hammerhead sharks—everywhere I looked. First their shadows, then their bodies, then the distinct hammer shape protruding out of the top of their heads. I was living in my Galapagos dream.

After I reluctantly moved on from Galapagos, my travels through Ecuador took me on a trip to Isla de la Plata (a smaller version of Galapagos), where, despite it being past whale season, I was treated to a mother and baby humpback whale breaching alongside our taxi boat (did I mention I carry a wildlife horseshoe with me on my travels?). I then ventured into the Amazon Rainforest, immersing myself in the sounds, scents, smells, and creatures of the jungle, including quirky toucans, mischievous monkeys, a sleepy sloth, and ample creepy crawlies. Then, to finish my Ecuadorian adventure, I spent time in Mindo, a town set in a cloud forest, which is home to approximately 550 bird species. I officially became a birder on that leg of my trip.

No matter what part of Ecuador you choose to explore, you will be treated to an unforgettable wildlife experience. These amazing creatures have adapted to the earth’s landscapes and created homes to survive and thrive, and we are the lucky spectators who have been given the opportunity to witness them.

Check out our other blogs

Savoring the Sounds of Nature in the Ecuadorian Amazon

Traveling to the Amazon Rainforest is an experience that ignites all the senses, transporting us away from life as we know it and deep into another world. It takes us back to basics and aligns us with nature so that we can immerse ourselves in the jungle that is alive and thriving around us. Earning its nickname of the, “Lungs of the Planet,’ it’s impossible not to feel revived after a visit to the Amazon. 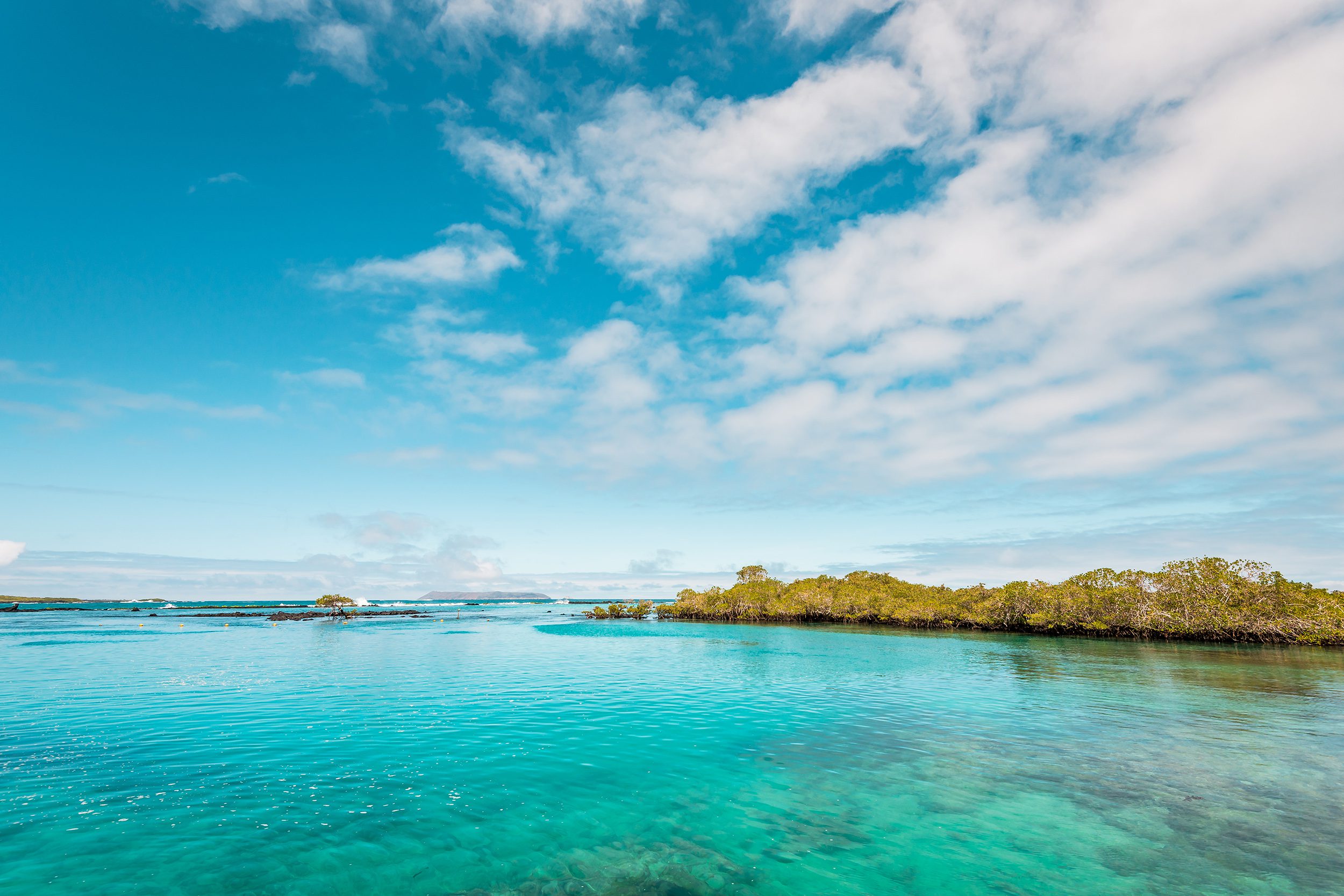 Explore Southern Africa through its incredible culinary experiences with Melony van der Merwe, a South African nomadic epicurean who has traveled the world in search of food for the soul through unique culinary experiences and culture. From foraging shellfish in Cape Town, sharing a meal in a Zimbabwean township to a farm-to-table meal in the Cape Winelands, these are her top five recommendations for culinary travel in Southern Africa.

The Extraordinary Guide to Marrakesh: 10 Ways to Experience the Magic of Morocco’s Fourth-Largest City

Marrakech is the kind of place that travel dreams are made of—a city full of winding streets and secret passageways, where half the fun of visiting lies in getting lost and stumbling upon something unexpected. With a population of almost one million people, Marrakech is the fourth-largest city in Morocco. But the tourist-friendly Medina—a car-free […] 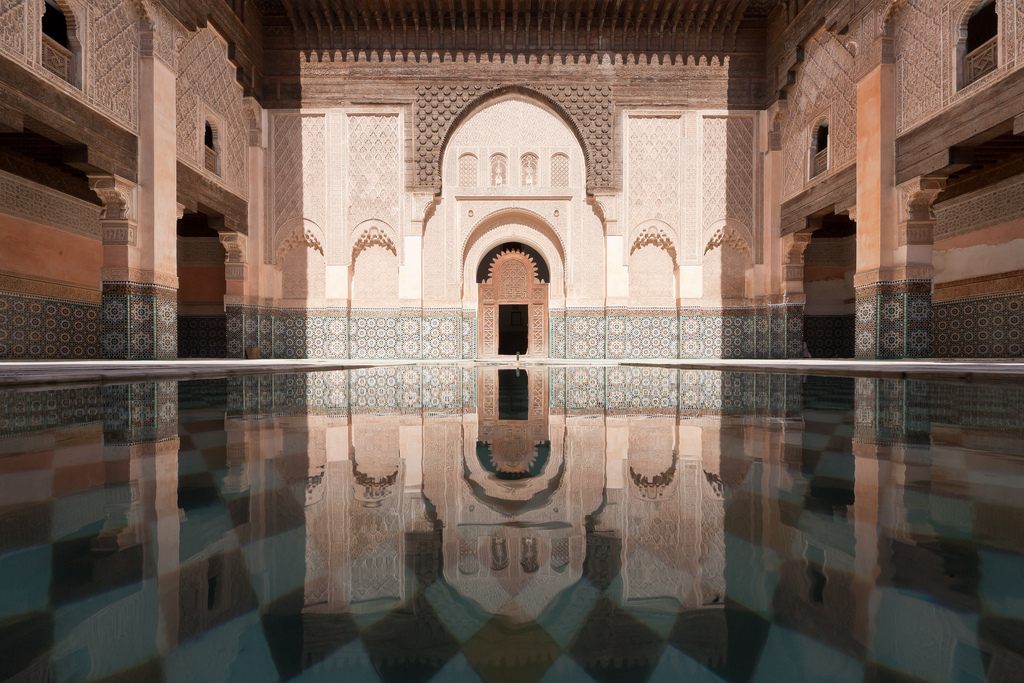