You simply cannot get a better subject for stunning photos than the exciting wildlife, dramatic landscapes, and beautiful people that you encounter in Africa. It’s truly a photographer’s paradise. We have been blown away by the photos that our clients have taken while on safari and we think it’s time they get some recognition! See for yourself! 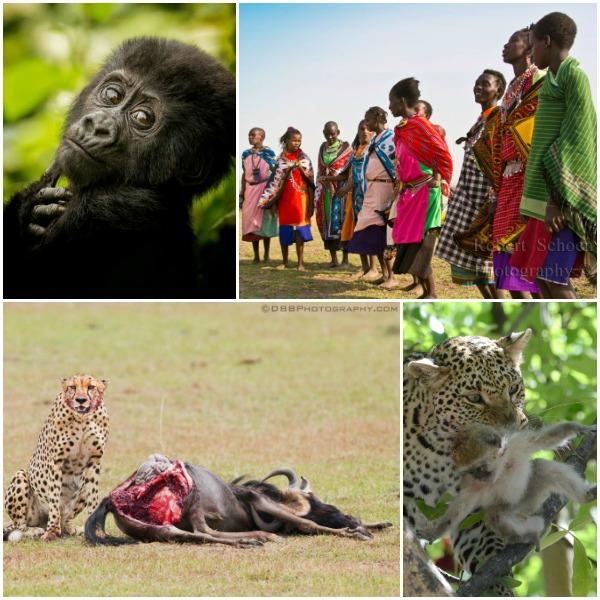 HOW TO ENTER: Use the hashtag #ejphotocontest when posting your photos to Facebook (you’ll have to “like” our page first and then post as “PUBLIC” or else we won’t be able to see it) or simply email them to elizabethg@extraordinaryjourneys.com. We’ll be rewarding the photographers of our favorite photos in the categories of wildlife, landscapes, and culture. We encourage you to enter as many as you can!

THE PRIZE: We’ll be giving away a copy of Nick Brandt’s Across the Ravaged Land, the final photo-book of his trilogy about wildlife in East Africa, to each of our three winners. (It’s amazing. Trust us.)

The deadline for submissions will be June 1 and we’ll announce our winners shortly after in our next newsletter. Start digging through the archives and get posting!

NO PURCHASE NECESSARY. Void where prohibited and outside US. Must be legal US resident 21+. Click here for official rules.

NO PURCHASE OR PAYMENT OF ANY KIND NECESSARY TO ENTER OR WIN.
A PURCHASE DOES NOT IMPROVE YOUR CHANCE OF WINNING.

Eligibility: To enter the Extraordinary Journeys Safari Photo Contest (the “Contest”), you must be at least 21 years of age and a legal resident of fifty (50) United States or the District of Columbia. Employees, officers and directors of Extraordinary Journeys (“Sponsor”), its parents, subsidiaries, affiliates, franchisees, advertising and promotion agencies, and anyone involved in the production or administration of the Contest, and any member of the immediate family or household of any such persons, are not eligible. Contest is void where prohibited. The Contest is subject to all applicable laws and regulations. Entry begins at 12:00:01 a.m. Eastern Time (“ET”) in the United States on May 7, 2015, and ends at 11:59:59 p.m. ET on June 1, 2015 (the “Entry Period”).

How to enter: During the Entry Period, you may email your photo to elizabethg@extraordinaryjourneys.com or you may use Facebook to enter. If you choose to use Facebook to enter, you must (1) visit www.facebook.com (the “Website”) during the Promotion Period and sign into your facebook account, (2) “like” the Extraordinary Journeys facebook page (www.facebook.com/ExtraordinaryJourneys), (3) upload a photo depicting “wildlife”, “landscapes” or “culture” and caption the photo to incorporate where it was take and the hashtag #ejphotocontest, and then (4) post as “public” to enter for a chance to win (your “Submission”).

Failure to be able to validate the authenticity of your entry when requested may result in disqualification.

Entry Content Guidelines: Your Submission must comply with the following guidelines:

General Entry Conditions. Not all entries will be acknowledged. In the event of a dispute over the identity of an entrant, entry will be deemed submitted by the authorized account holder of the account listed in the entry or of the email account. “Authorized account holder” is defined as the natural person who is assigned to an account by an Internet access provider, on-line service provider, or other organization (e.g., business, educational institution, etc.) that is responsible for assigning accounts for the domain associated with the submitted account. All entries must be received by the end of the Entry Period. Proof of transmission is not proof of receipt. Sponsor’s computer is the official timekeeping device for the Contest. Entries must not transmit anything that contains viruses or anything else that is harmful to any computer. No responsibility is assumed for late or misdirected entries, or any failure or unavailability of hardware, software, electronic communications, or Internet uploading or other connections. Sponsor is not responsible for any changes or effects caused to your computer system or video equipment as a result of submitting an entry.

Usage Rights in Entries. Sponsor and its designees shall have the unrestricted and non-exclusive right to edit, adapt, publish, copy, display, perform, broadcast, modify, and otherwise use any or all Submissions, alone or in combination with other material including but not limited to essays, photos and/or videos in any and all media, whether now known or later discovered, in perpetuity, without restriction of any kind whatsoever, without further compensation to the entrant or anyone else. Without limiting the foregoing, entries may be posted on the Website, on Sponsor’s website, Facebook page, Instagram feed or in Sponsor’s newsletter or Sponsor’s advertising for public viewing. Sponsor reserves the right to review any entry prior to any such posting, to remove any entry at any time after posting, and to remove any incidental material that could be deemed infringing where doing so would not materially alter the entry and where the entrant otherwise clearly intended to comply with these Official Rules, as determined by Sponsor. No guarantee is made that any particular entry will or will not be posted or as to the length of time between submission and posting. Sponsor reserves the right, in its absolute discretion, to determine if any particular entry is appropriate for posting. All entries that are uploaded and made available for viewing by the general public will be deemed posted at the direction of the entrant within the meaning of the Digital Millennium Copyright Act and the Communications Decency Act. Entry constitutes permission for Sponsor and its designees to use winner’s name, biographical information, photo and/or likeness in any and all media, now or hereafter devised, worldwide, in perpetuity, for internal, advertising, Contest and other purposes without additional compensation, notification or permission, unless prohibited by law. Potential finalists and/or winners may be required to assign all rights in entry to Sponsor without additional compensation.

Judging. All entries will be judged by persons chosen by Sponsor, and decisions of the judges are final and binding.

Prize: The following prize(s) is/are available: One (1) winner in each category will receive a copy of the book titled Across the Ravaged Land by Nick Brandt. Total Approximate Retail Value (“ARV”) of each prize is: US$ 65.

General Prize Conditions: No transfer, assignment or substitution of a prize, except Sponsor reserves the right to substitute prize (or a portion thereof) for an item of comparable or greater value, at its sole discretion if any advertised prize becomes unavailable.

Release of Liability: By entering the Contest, entrant agrees to hold Sponsor, its parent, affiliate and subsidiary companies, franchisees and advertising and Contest agencies and each of their respective directors, officers, employees and assigns (collectively, the “Released Parties”) harmless for any injury or damage caused or claimed to be caused, in whole or in part, directly or indirectly, by participating in the Contest or by acceptance or use of a prize (including any travel or activity-related thereto). Released Parties are not responsible for lost, late, misdirected, delayed, inaccurate, illegible, garbled, stolen or incomplete entries or entries not received for any reason or for electronic transmission errors resulting in omission, interruption, deletion, defect, delay in operations or transmission, theft or destruction or unauthorized access to or alterations of entry materials, or for technical, network, telephone equipment, electronic, computer, hardware or software malfunctions or limitations of any kind, or inaccurate transmissions of or failure to receive entry information by Sponsor on account of technical problems or traffic congestion on the Internet or at any Web site or any combination thereof or for any other errors or difficulties of any kind whether human, mechanical, electronic, computer, network, typographical, printing or otherwise relating to or in connection with the Contest, including, without limitation, errors or difficulties which may occur in connection with the administration of the Contest, the processing or judging of entries, the announcement of the prizes, the incorrect uploading of any photo or essay or in any Contest-related materials. Released Parties are also not responsible for any incorrect or inaccurate information, whether caused by site users, tampering, hacking, or by any equipment or programming associated with or utilized in the Contest. Released Parties are not responsible for injury or damage to any person’s computer related to or resulting from participating in this Contest or downloading materials from or use of the Page or any web site. Persons who tamper with or abuse any aspect of the Contest or Web site, who act in an unsportsmanlike or disruptive manner or who are in violation of these Official Rules, as solely determined by Sponsor, will be disqualified and all associated Entries will be void. Caution: Any attempt by an individual to deliberately damage any Web site or undermine the legitimate operation of the Contest is a violation of criminal and civil laws and should such an attempt be made, Sponsor reserves the right to seek damages and other remedies (including attorneys’ fees) from any such individual to the fullest extent of the law.

(i) By participating, you further agree that: (i) any and all disputes, claims, and causes of action arising out of or in connection with the Contest, or any prizes awarded, shall be resolved individually without resort to any form of class action; (ii) any claims, judgments and awards shall be limited to actual out-of-pocket costs incurred, including costs associated with entering the Contest, but in no event attorney’s fees; and (iii) under no circumstances will any entrant be permitted to obtain any award for, and entrant hereby waives all rights to claim, punitive, incidental or consequential damages and any and all rights to have damages multiplied or otherwise increased and any other damages, other than damages for actual out-of-pocket expenses.

Governing Law: Except where prohibited by law, all issues concerning the construction, validity and enforcement of these Official Rules, or the rights and obligations of the entrant and Sponsor, shall be constructed and governed by the laws of the state of New York, without regard to conflicts of law. Claims may not be resolved through any form of class action. Venue for all suits will be in the Southern District of New York or, if there’s no federal jurisdiction, New York County, New York.

Severability: If any provision(s) of these Official Rules are held to be invalid or unenforceable, all remaining provisions hereof will remain in full force and effect.

Facebook: By participating, you release Facebook and its parent companies, subsidiaries, affiliates, partners, employees, directors, agents, advertising agencies, from any and against any and all injury, loss or damage caused or claimed to be caused by your participation in the Contest and/or the acceptance, awarding, receipt, use and/or misuse of the prize. Any information you submit online is to the Sponsor, not to Facebook. This promotion is in no way sponsored, endorsed or administered by, or associated with, Facebook.