Mother-Daughter Adventure in Kenya, Last July, my daughter Elsa and I ventured to Kenya for a mother-daughter adventure celebrating Elsa’s graduation from middle school.

After a long flight, we spent the first night at House of Waine in the leafy suburb of Karen outside of Nairobi. It’s a perfect spot for families because there is a spacious lawn, pool and gardens and they are very accommodating. You can order anything when you arrive (literally anything, even at 10pm). 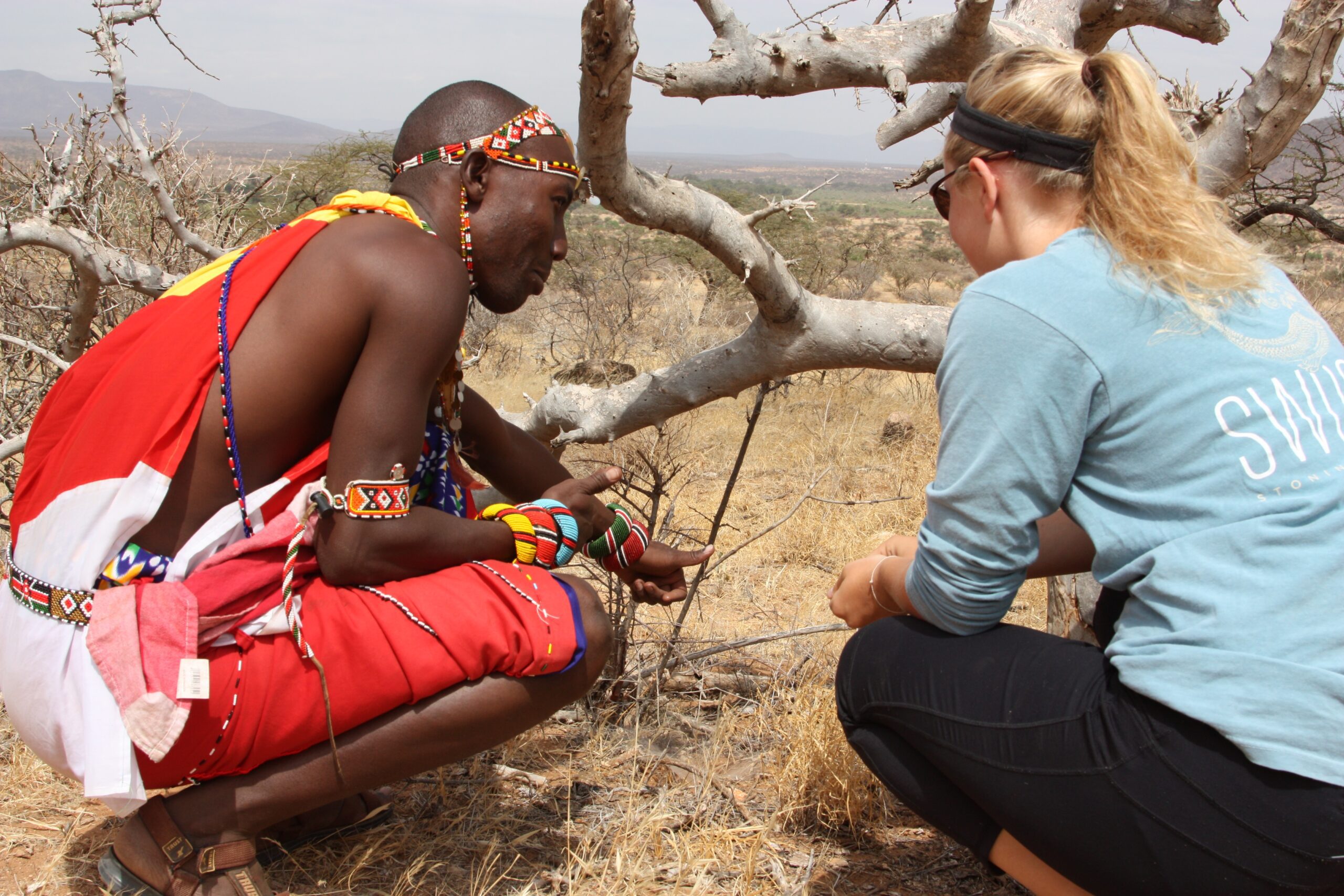 The next morning, we set off bright and early to fly to Saruni Samburu. The Samburu area is very rugged and dry, quite the opposite of the lusher Maasai Mara. When we landed, we were met on the airstrip by our guide Francis. Francis and Elsa became fast friends, and he made our trip so special with his whit, insight and passion for wildlife.

On this amazing Mother-Daughter Adventure in Kenya we stayed at Saruni Samburu which is a luxury lodge that is set on top of a massive rock hill. When you are driving up to it, you don’t think your vehicle is going to make it to the top, over the smooth exposed granite… It’s a one-of-a-kind driveway! Our room was huge and beautiful with wide open views. We felt at home right away. One thing that is really great about Samburu is that it is in a part of Kenya that has some species that are endemic to Northern Kenya – vulturine Guinea fowl, different giraffe species, different antelope species… It’s really interesting because it’s a contrast to what you will see in Southern Kenya. 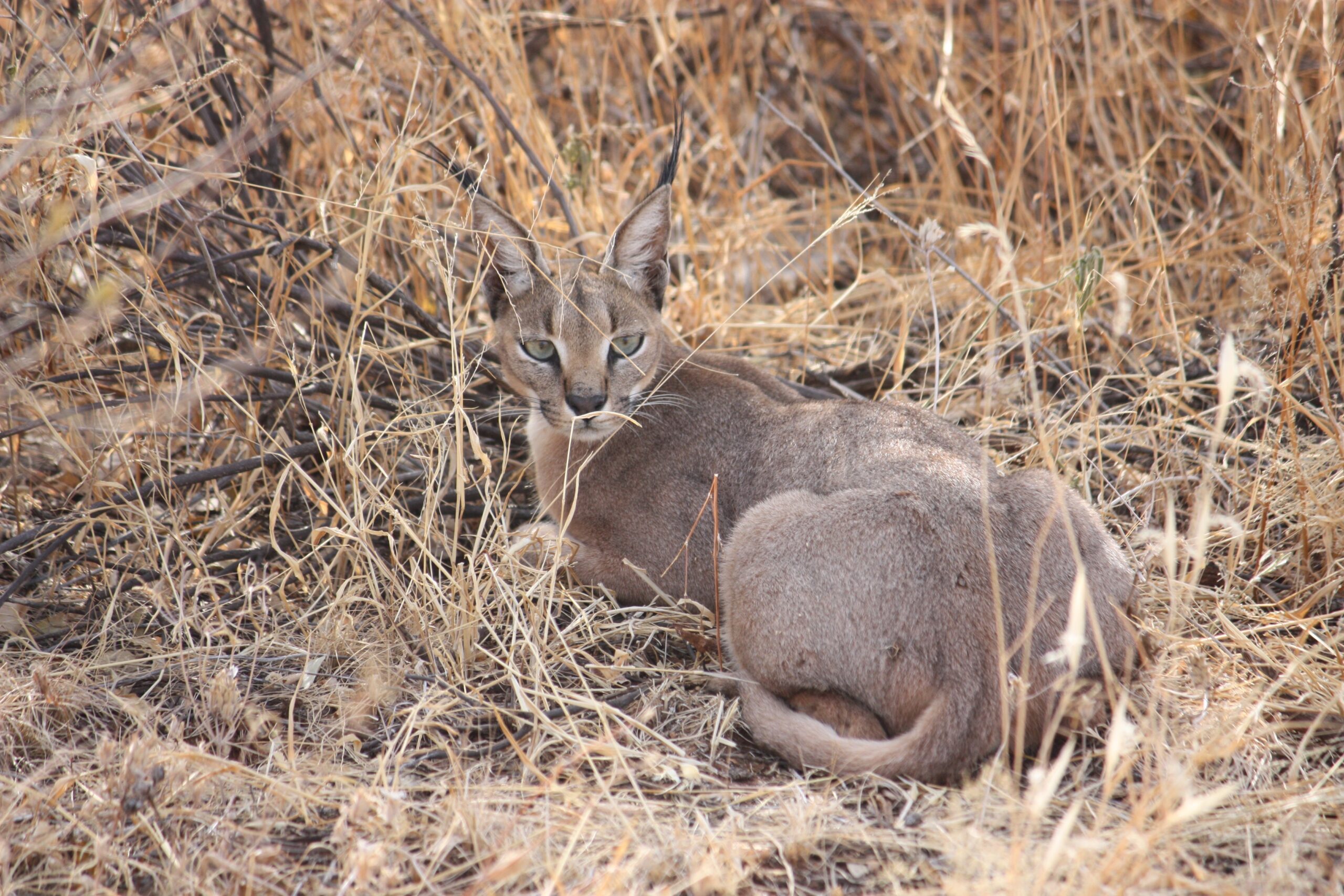 One of our best wildlife sightings was on our first afternoon. We were up close to a caracal (a medium-sized wildcat) for about 5 minutes. The caracal is beautiful and extremely rare to see for any length of time, but this let us watch her for five minutes. It was really amazing! We did most of our game drives in the park, but the lodge is set off on its own private conservancy area (about a 30 minute drive from the park). It’s great because right away we saw lions, lots and lots of elephants and endangered Grevy’s zebra with their rounded Mickey Mouse ears.

The highlight of our Mother-Daughter Adventure in Kenya, on the first evening we enjoyed a very authentic Samburu dance performed by the tribesmen, who work in the camp. We were enjoying dinner in a dry riverbed on the conservancy (which was so fun) and then, out of the blue, the Samburu tribesman performed a very uncontrived dance. The night air was filled with singing and Elsa ended up dancing with them, jumping as high as possible as part of the dance! Everyone was having a blast and laughing and joking… The managers would join and then the guests would join. It was an amazing, complete first day on safari! 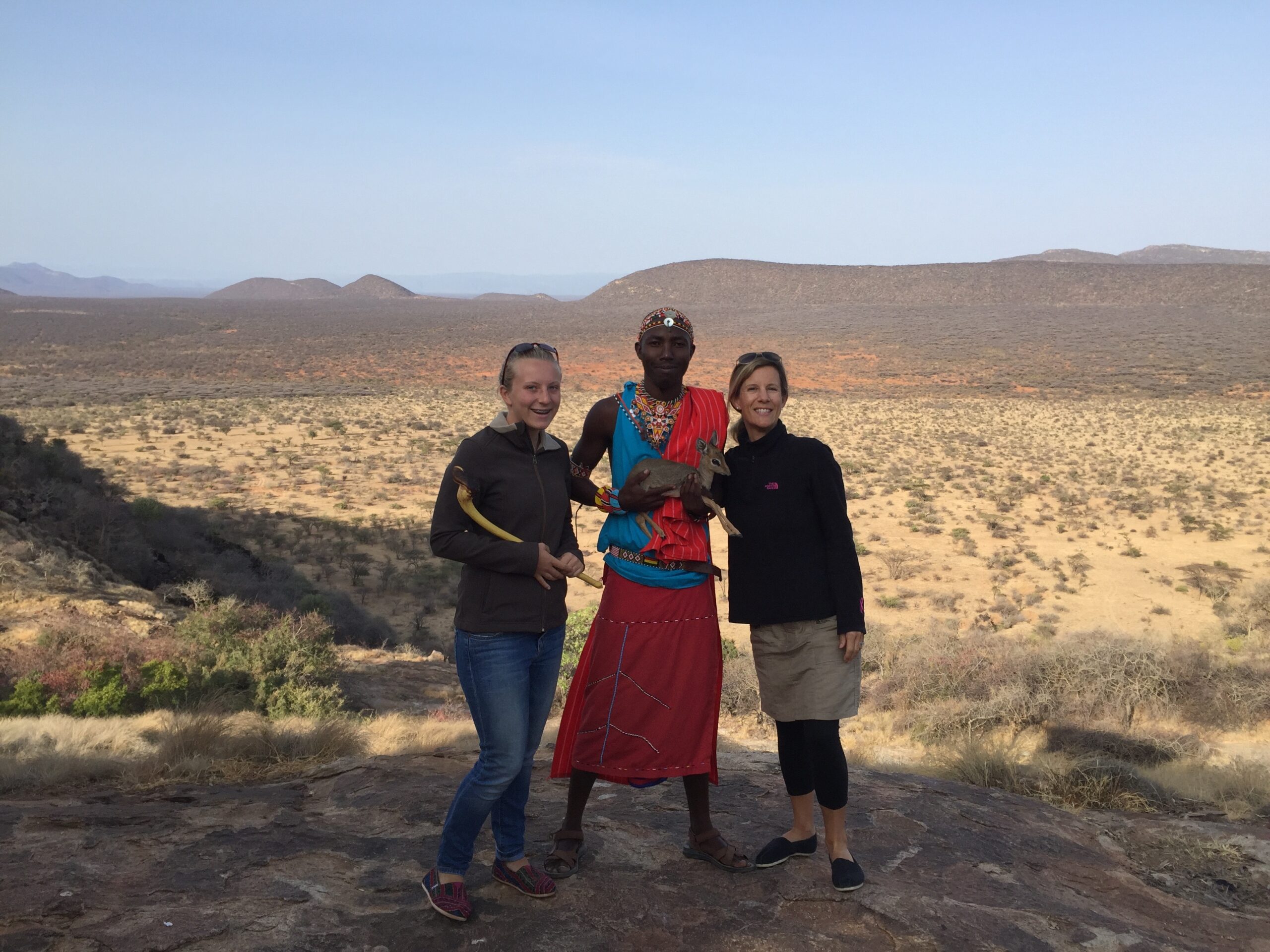 The next morning, Francis introduced us to the camp pet Sarah – a dik-dik (a small antelope). We had breakfast with the baby dik dik and then headed out for a full day in the park. We had some amazing, close encounters with lions. We have a great photo of a lioness using our vehicle for cover while stalking an impala and a zebra coming across the riverbed! We also had an interesting experience in which local culture and wildlife nearly clashed. We were watching the lioness when African herders appeared with their cattle by the river in the park (which they are not allowed to do). The lioness turned her attention to them, but our guides shooed the herders away… It could have been a serious situation for both lion and herder.

Later, we returned to the lodge for complimentary massages and a swim in the huge pool. On a cultural note, we hiked on the hills behind the lodge and were given a lesson in fire making and Samburu history – a taste of “warrior academy” – and learning about what it is to be a young Samburu person. This experience was fascinating and presented in a very low key, conversational way, so we felt lucky to have a glimpse into the Samburu world. 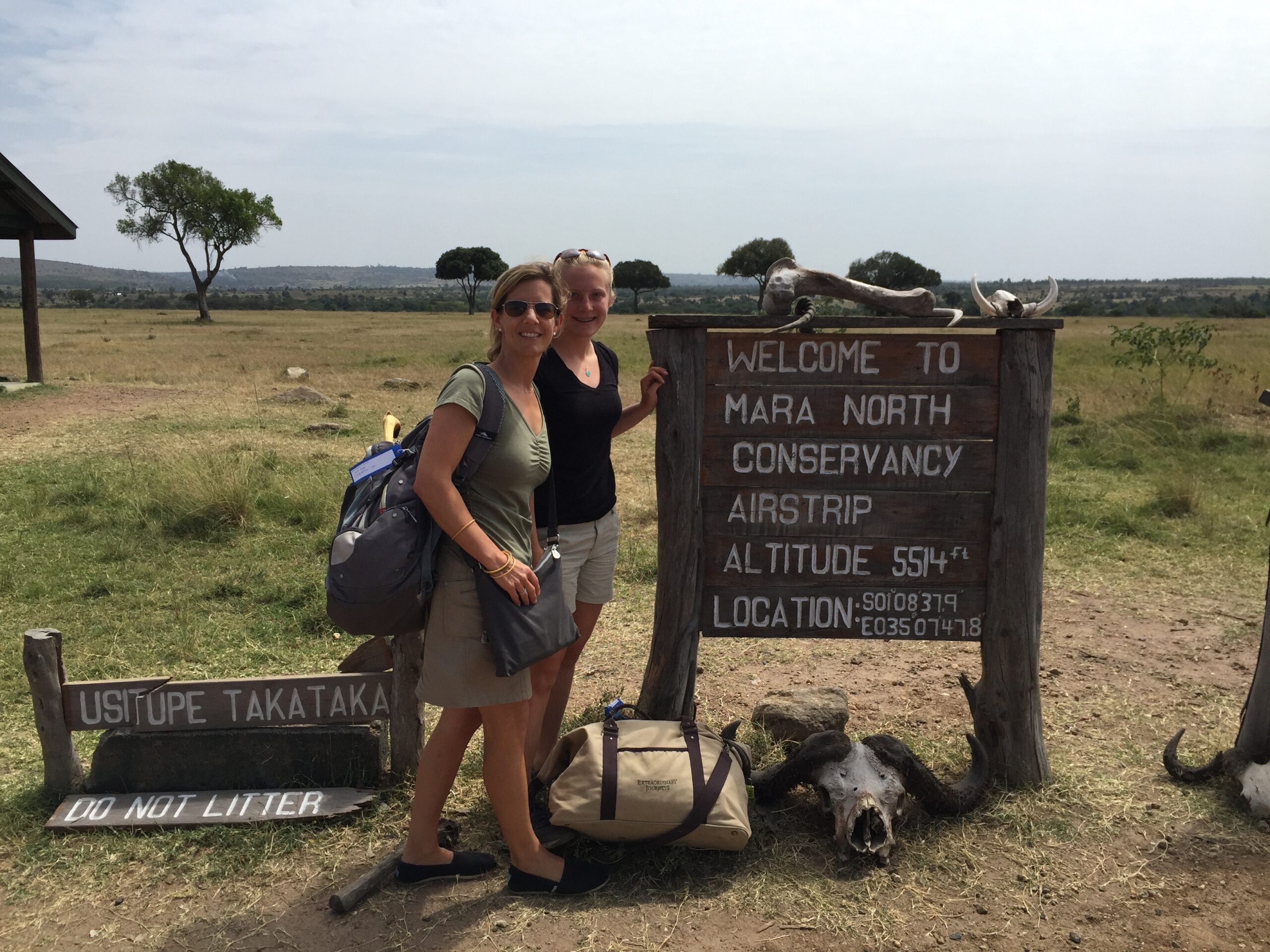 From Samburu, we flew down to the Maasai Mara and landed in the Mara North Conservancy. It felt like we had landed where they let off all the animals from Noah’s Ark! The grass is cropped low and there are these old trees with animals strolling everywhere. Then, to welcome us to the Mara, we had a beautiful picnic lunch beside the Mara River, hippos honking in the background – It was fantastic!

We stayed at Saruni Wild, a small tented camp in a private conservancy with kerosene lanterns, hot bucket showers, great staff and wonderful food. We had a lot of classic wildlife viewing. We saw everything – a big male lion right near camp, lionesses staking game and lots and lots of elephants. We were in the Mara at a time of year when there should have been wildebeest crossing the river, but, unfortunately, they didn’t cross while we were there. We did see something really unique though… There was a huge fish eagle fighting with this tiny crocodile over a piece of wildebeest, a really fun Nat Geo type moment!

Our next stop in the Mara was Serian Nkorombo, Alex Walker’s mobile camp right in the Park. This small camp charmed us, and enjoyed the gurgling river and a candlelit dinner with our charismatic hostess. A pride of 20 lions with cubs were our focus the next morning and we followed them until we were too hungry and stopped for a hearty breakfast at a zebra filled waterhole. As we left the park, we spotted a black lump in a field of gold. A rare black rhino right out in the open – a total fantastic sighting! 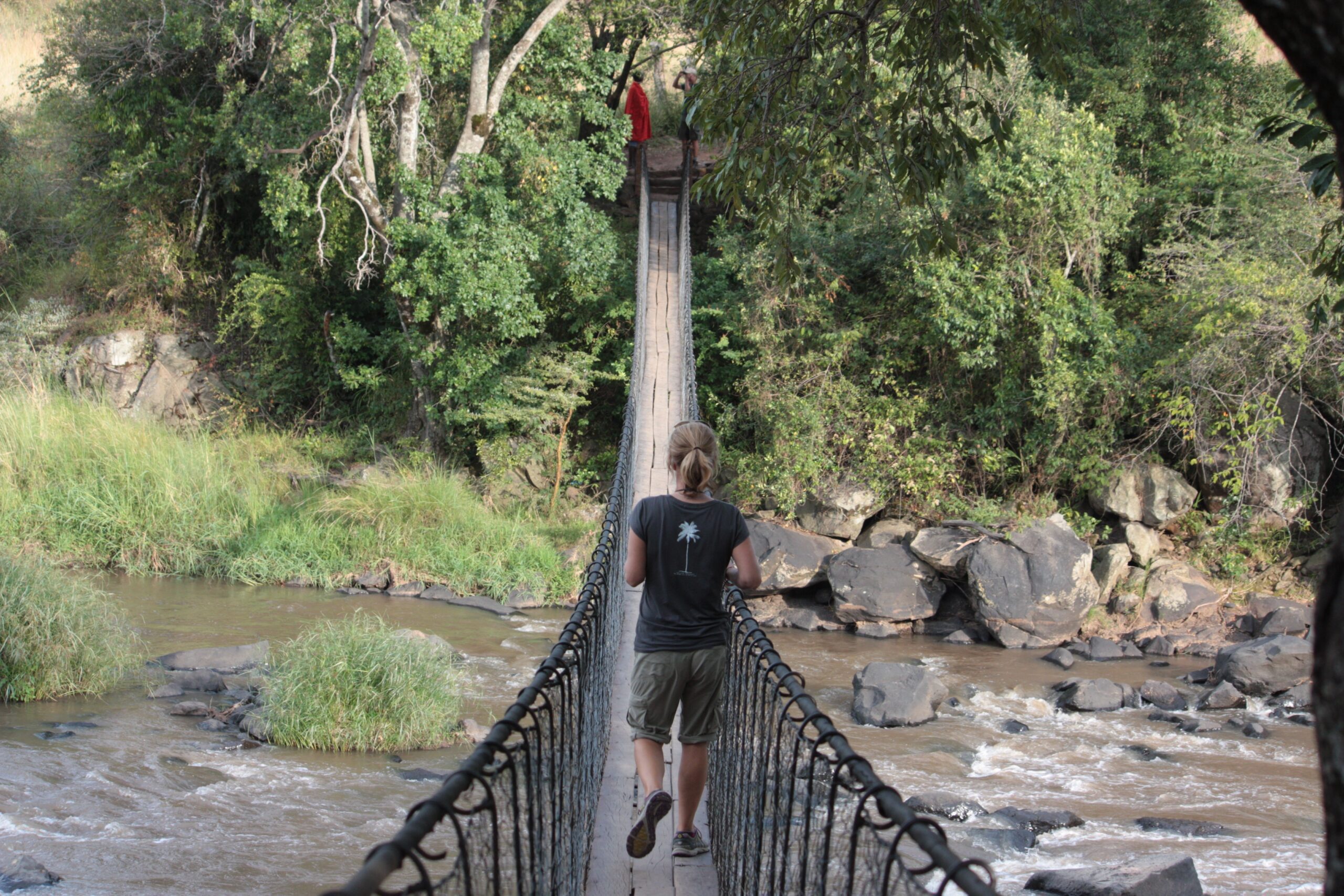 We ended our trip at Serian Camp, one of EJ’s favorite camps in the Mara. The setting can’t be beat – right on the river so there is a lot of bird life, hippos, etc. They have this great philosophy at Serian that involves every guest group having their own guide and vehicle, and recently, they added a tracker to the mix as well. We were lucky enough to have a local Maasai woman as our tracker.

With all there is to see and do here, it’s no surprise that many of our highlights at Serian were not the game drives. A guided game walk across the river and up the escarpment provided sweeping views and left us more than hungry for our gourmet picnic lunch at their comfy tree house. We fished one afternoon and ended up seeing a baby python in the water! Just Elsa and I were out for a walk with our Maasai tracker and had a perfect, unscripted safari moment that happen when you are with a really good guide in an authentic setting… The Maasai tracker and Elsa started talking about food and the traditional Maasai food – specifically, blood and milk for breakfast – that she misses from home. The young woman was only about 5 years older than my daughter, and they had a whole conversation about breakfast food from different cultures. Elsa and I will always remember that morning, walking across the Maasai Mara talking about the merits of blood and milk for breakfast. 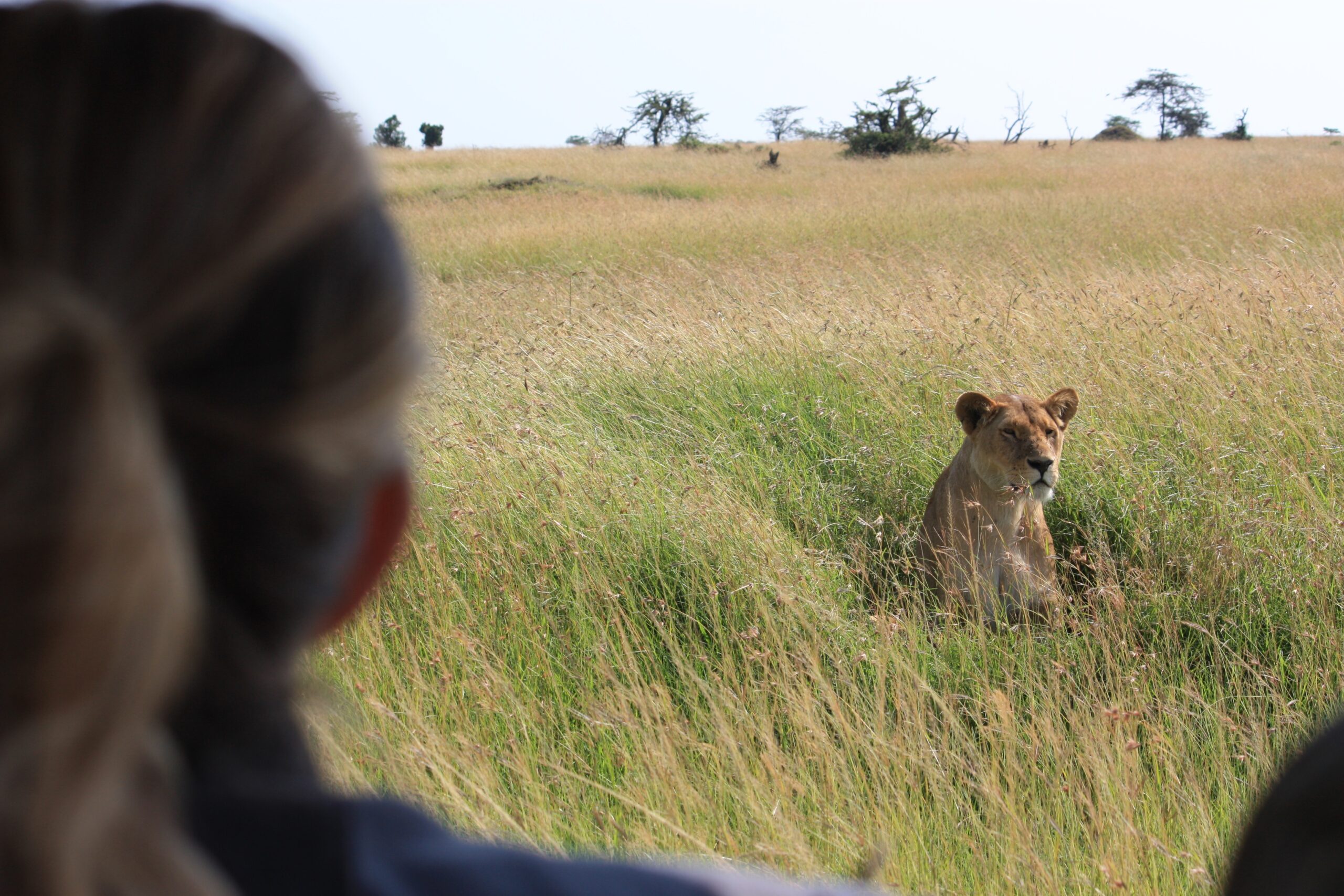 Our final night on safari, we went on a game drive with a few “guides in training,” from camp. First, we witnessed a warthog rushing from a hyena den, then we found lions stalking buffalo as the sun was setting. The lions closed in for the kill just as it went dark! They didn’t end up with a buffalo, but the adrenaline was pumping and they ran to make the kill, but didn’t end up making it… It was still really exciting. You can never predict what is going to happen when you’re on safari! But one thing is for certain, there’s no better place for a mother-daughter adventure than on safari.

For more information on Mother-Daughter Adventure in Kenya email info@extraordinaryjourneys.com