Safari Seasons in Southern Africa, When planning your safari to Southern Africa it’s important to understand the seasons because they can influence game viewing, prices and availability. It might seem complicated but here are the basics on the southern Africa safari seasons:

The Four Seasons in Southern Africa

The most important to thing to remember is that summer and winter in Southern Africa are the opposite of the Northern Hemisphere!

Summer (hot and rainy): November – April
The summers are hot, with heavy rainfall, often in the form of afternoon thunderstorms. The rains in November and December can be very heavy & frequent, which are known to induce floods in January and February in the most exposed areas (Mozambique, …). Otherwise, the summer rains are limited to short-time heavy showers, leaving that special smell in the air, while the rest of the day is warm to hot and sunny, in some areas it can also be very humid.
This is the worse time in malaria-prone regions.

Autumn (mild & nice) : April – June.
Offers very mild & pleasant weather, with little or no rain fall, warm but not oppressive temperatures – both rain and temperatures declining as the season progresses.

Winter (fresh & dry): July & August
This season is generally characterized by dry, sunny, crisp days and very cold nights. Warm clothing for the evenings and nights is essential, the temperatures during the day are very warm and comfortable.

Spring (mild turning to very hot): September – October
Spring is characterized by mild temperatures – how ever as we enter into October and November temperatures increase rapidly until the first rain showers arrive, (normally expected after mid-October or November).

Rather than classical seasons, people in the region (and especially safari people) tend to refer to the green/rainy/low season or the dry/high season, because the availability of water strongly impacts game movement and viewing. The dry season (June to October) is normally considered best for game viewing, and is also the high season for the safari industry. The green and shoulder seasons run from November to May and have their assets too including lower prices and lots of new babies. 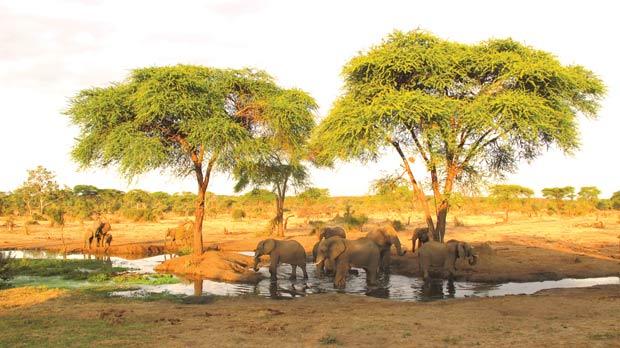 This season is hot and rainy season and is considered the low season for safari operators because game viewing can be more difficult. This is because when water is plentiful the animals are able to disperse, the bush is thicker making it harder to spot animals and the rain allows insects to flourish. Some areas become inaccessible even with the best 4-wheel drive vehicle. Depending on the area this season also has its advantages:

The dry season, and especially in the latter months (late summer in the Northern Hemisphere) when it is hot and dry, is the most favorable time for game viewing, especially in the classical safari areas. Animals tend to gather in larger concentrations around the few remaining water sources and with thinner vegetation game viewing in unobstructed. The dry season is usually considered high season by safari operators. This also means higher prices and more people.

Shoulder Seasons: April/May, sometimes June and November
The shoulder seasons are the months that transition between the high and low seasons (between the dry and rainy season). They can be great times to travel and are often less in demand which means they can be a good time to go deal hunting.

The Southern Africa region offers enough diversity to accommodate all travel plans! To figure out when and where is the perfect fit for you and your family email us at info@extraordinaryjourneys.com.