Visions of Namibia: Pioneering Initiatives in Conservation, This is a great itinerary for active travelers who want to get their hands dirty and participate in some of Namibia’s and Southern Africa’s most successful conservation projects.

Upon arrival in Windhoek, you will be met by an Extraordinary Journeys representative and driven to Galton House where you will spend your first night in Namibia. 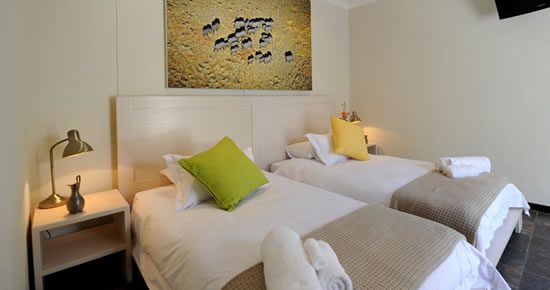 Windhoek, the capital of Namibia, is located in a basin between the Khomas Highland and the Auas and Eros mountains. With 150,000 inhabitants, it is the biggest city in the country. It is a meeting place between Africa and Europe, the modern and the old. In the capital’s main street, well-preserved German colonial buildings are in sharp contrast with modern architectural styles, while Herero women in their traditional Victorian dresses mingle with executives dressed in the latest fashions. One of the most remarkable features of Windhoek is the mountains and hills that encircle the city. Standing 5,428 ft. above sea level, these spectacular peaks create some of the most breathtaking views and are a spectacular site to be seen.

Named for the famous explorer, Sir Francis Galton, Galton House has a relaxed but efficient style creating a very welcoming atmosphere. The interior is a combination of modern minimalist and understated chic; the impressive wildlife photography adorning the walls is an ode to the country’s conservation efforts

A mere ten minute drive from the center of town and perched on the edge of the affluent suburb of Eros, guests at Galton House are ensured peace and tranquility. Wi-Fi is available throughout the property and each of the hotel’s eight guest rooms has wired internet connectivity and satellite television. There is a coffee/tea station available in the reception area and can also be provided in the rooms on request.

The property is outfitted with a large lounge, indoor and outdoor dining areas, swimming pool, garden areas, and a day room for early arrivals and late departures. There is also a delightful ‘al fresco’ dining area by the pool where freshly prepared meals are served. A number of shops, restaurants and supermarkets are within easy walking distance.

Begin your adventure with a scenic drive north; visit Okahandja’s craft market en route to the well-appointed Okonjima Bush Camp where you will set out on leopard and cheetah tracking expeditions. The following day, explore the work of the Africat Foundation, one of Namibia’s most successful predator conservation projects. 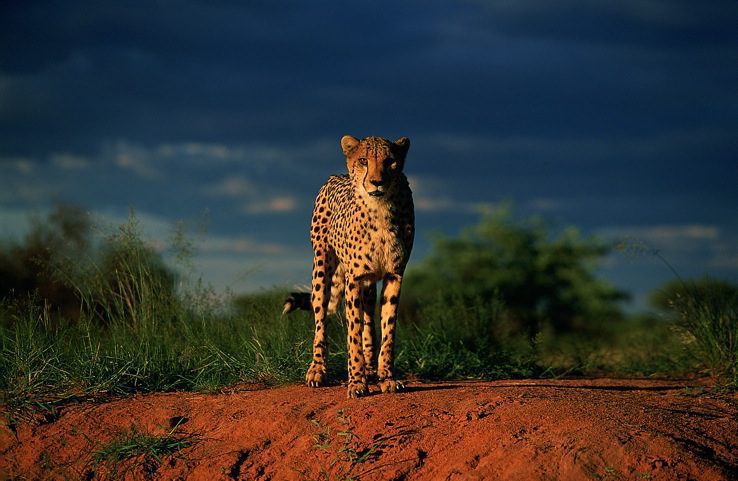 The luxurious and relatively new Okonjima Bush Camp is situated halfway between Windhoek and Etosha National Park, in a wilderness area. Big cats are the main attraction here, and as Namibia has over 20% of the world’s cheetah population, Okonjima has become the base for the Africat Foundation.

Founded in 1991, the wildlife sanctuary is dedicated to creating conservation awareness, preserving habitat, promoting environmental educational research and supporting animal welfare. Their main focus is Africa’s big cats, especially injured or captured leopard and cheetah. AfriCat runs the largest cheetah and leopard rescue and release program in the world. In the last 17 years, over 1,000 of these predators have been rescued and over 85% have been released back into the wild. Close encounters with leopard and cheetah are an unforgettable highlight of your time at AfriCat. Track leopards by vehicle, visit the cheetah welfare project, and spend some time in a night hide to see such nocturnal animals as porcupine, caracal, honey badger and even leopards. 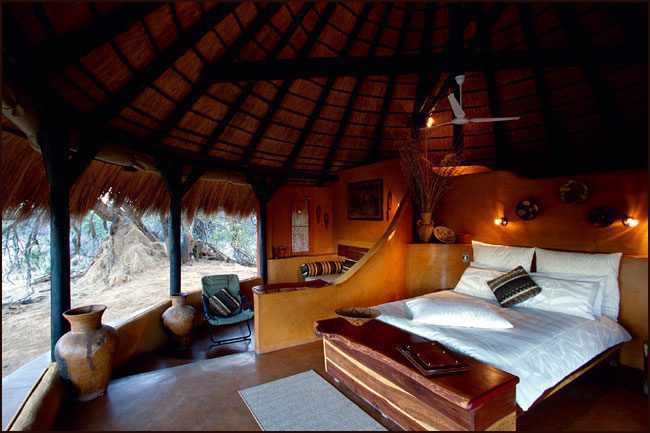 The Bush Camp ‘Lapa’ is built in the shape of the indigenous ‘Camelthorn’ pod and houses the reception, well stocked-bar, curio shop, and lounge area, complete with open fireplace and large comfy chairs to relax on. Meals are served in indoor and outdoor dining areas, an ideal spot to watch the sun set with a cool sundowner, around a lovely fire. Accommodation in the camp consists of 8 luxury, thatched African-style chalets, and 1 luxury, honeymoon suite. With complete privacy in mind, the chalets have been sited between 80-100m apart. The chalets are a combination of earthy ochre walls, and khaki green canvas, under a thatched roof. The front half of the canvas paneling can be rolled up not just for an extra bush veld view, but also for natural cross-chalet ventilation.

The guided and self-guided walks around Okonjima can be excellent for bird-watching, and the lodge itself has a variety of watering points, bird-baths, dams and lakes that help to attract in the local birdlife. It is a great place to explore a bit of the African bush on foot.

Enjoy morning game activities in Okonjima before departing for Grootberg. Pass through the town of Outjo and the settlement of Kamanjab in the heart of Damaraland en route to the Grootberg Lodge, your base for tracking the endangered black rhinos that make their home in the Namib Desert.

Perched on the rim of the Grootberg Plateau, Grootberg Lodge offers unsurpassed views over the Klip River Valley below. A landmark in Namibia, the Lodge is the first in the country owned 100% by the conservancy on which it lies. Funded by a European Union project, the Lodge’s commitment to the community is second only to its aims of sustaining the conservancy and in showcasing the value of conservation and biodiversity through tourism.

Each of the charming en-suite rock and thatch chalets gaze out over the gorge, where black eagles hunt just below the level of your private deck. The lodge main area with restaurant, bar and swimming pool were also designed to maximize the stunning valley views.

Explore this pristine wilderness on foot or by vehicle to encounter the desert adapted ele inhabitants of this remote biosphere. Desert adapted elephant, black rhino, giraffe, kudu, oryx and lion are just some of the animals that roam the area. 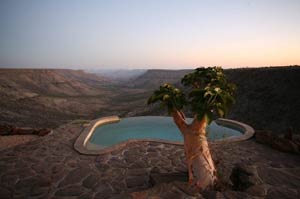 Begin your rhino tracking adventure by identifying the tracks from the crash’s last spotting and begin your search from that point. Namibia is home to the larger of two subspecies of the black rhinoceros found in southern Africa. The only population that remains in the wild, unfenced and outside reserves occupies an arid range in the western Kaokoveld. Their preferred habitat is the mountainous escarpment, but they follow ephemeral rivers into the northern Namib as well, especially when conditions are favorable after rains. They are the only black rhinoceros in Africa that are internationally recognized as a “desert group”. Like the desert-adapted elephant, they cover great distances, walking and feeding at night and resting during the day. To meet their nutritional and bulk requirements, they browse on no fewer than 74 of the 103 plant species that grow in their range. Once widespread in the subcontinent, black rhinoceros are an endangered species.

On the drive south, pause for a visit to a local Himba settlement to absorb the culture of one of the last semi-nomadic peoples in Namibia. Upon arrival at Damaraland Camp, search for the rare desert elephant set against the stunning landscape and geologic wonders of the region. 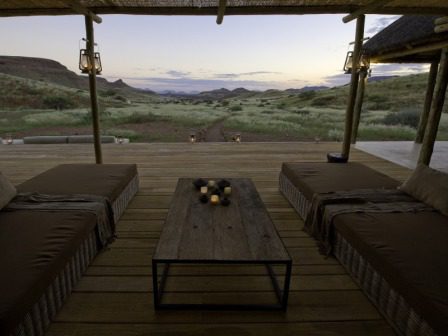 The Himba, Tjimba and other Herero people who inhabit Namibia’s remote north-western Kunene Region are loosely referred to as the Kaokovelders. Characterized as tall, slender and statuesque people, the Himba women are especially noted for their unusual sculptural beauty, enhanc ed by intricate hairstyles and traditional adornments. 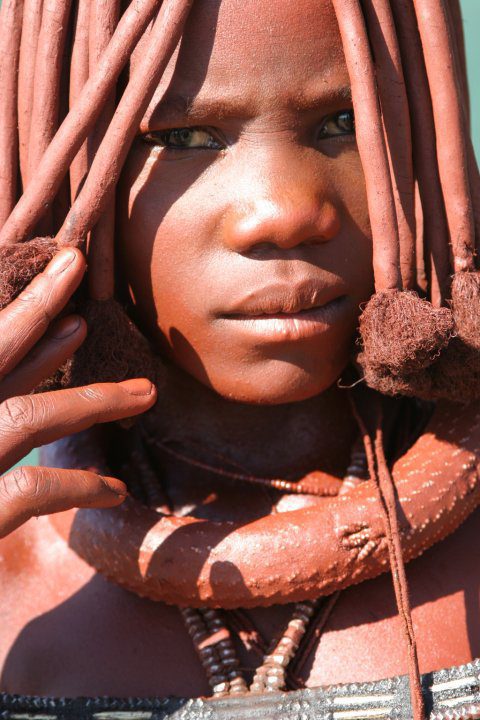 Damaraland is considered one of the most interesting and beautiful areas of Namibia. It has several endangered desert-adapted species such as the rare desert elephant. The hunting of wildlife in this area threatens to push populations down to risky levels Ecotourism projects have created a viable alternative by providing benefits to the local communities from the preservation of wildlife by making the community an active partner in the management of Damaraland. So far, the management plan for Damaraland has led to increases in the numbers of desert animals. Bird life is concentrated mostly along the dry river beds, but can be quite prolific here as well.

In regions with sufficient vegetation and water, an adult elephant can consume as much as 660 pounds of food and 60 gallons of water every day of its life. The desert elephant’s survival depends on their ability to walk further for water and food than any other elephant in Africa. The distances between waterholes and feeding grounds are as great as 40 miles. The typical home range of a family herd is larger than 1,240 miles or eight times as big as ranges in central Africa where rainfall is much higher.

In addition to the rare mammals and birds you will see on game drives through the desert, southern Damaraland boasts a wealth of anthropologic and geologic wonders. Strewn over a hillside at Twyfelfontein in the southern Kaokoveld, boulders and slabs of red sandstone hold some 2,500 prehistoric engravings that depict wildlife, animal spoor and abstract motifs. The rounded hill south-west of the Petrified Forest, known as the Burnt Mountain, seems to catch fire at both sunrise and sunset. Its fantastic range of colors comes from a chemical reaction that took place 132 million years ago when molten lava penetrated shale and limestone deposits. In ordinary sunlight, it is a dull black with blackened rubble lying to one side like cinders from the original fire.

Owned and operated by the local community, Damaraland camp is a sustainable ecotourism venture made distinct by the mixed heritage of the local peoples who run it. Situated in the rugged beauty of the northern slopes of the Huab River, this private paradise offers stunning silence, beauty and tranquility in large adobe-style thatched units raised on individual wooden decks. Complete with an en–suite bathroom, the spacious, thatched living area features a dining room, small curio shop, bar, and open fireplace. The swimming pool is conveniently sited near the bar and provides welcome relief after an exciting day. The camp serves as an excellent base from which to search for desert adapted elephant and other game that frequent the local dry river beds. 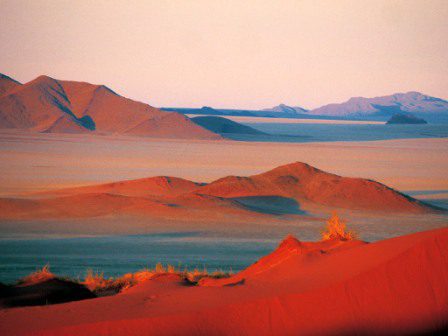 The breathtaking NamibRand Nature Reserve, one of the largest private nature reserves in Southern Africa, begun as a conservation initiative in 1984 and now extends over nearly 500,000 acres of pristine Namib Desert, restoring land that was once used for Karakul sheep farming. The particular attraction of NamibRand is its diversity of different desert landscapes, representing virtually all facets of the Namib Desert. Expansive sand and gravel plains and endless stretches of grass savannah alternate with majestic mountain ranges and vegetated dune belts of deep red sand. The variety of plants and flowers is as fascinating as the color nuances of the landscape, which change continuously as the day progress. Before NamibRand became a private nature reserve, it consisted of sheep farms, surveyed and allocated in the early fifties to ex-soldiers of World War II. Today visitors to the NamibRand can admire nature in its original state, as indigenous animals and plants are flourishing back where they belong.

Located on the very edge of an 800-foot high dune, the Wolwedans Dune Camp sleeps 12 guests in a totally unspoilt setting. Guests stay in comfortable tents pitched on wooden platforms furnished with standard beds, bedside tables and a suitcase rack. Each tent has a spacious veranda and private bathroom fitted with a hot shower, washbasin and flush toilet. Meals are enjoyed at the central lapa. The lounge, dining area and open-plan kitchen guarantee a cozy ambience. 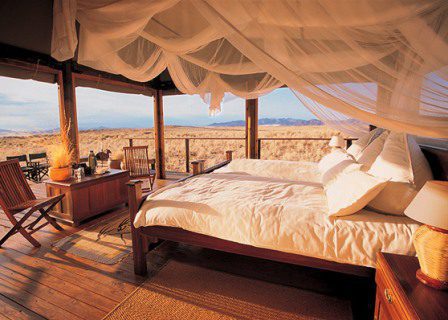 A sun-downer deck with fireplace provides a relaxed atmosphere for brilliant stargazing. Ideally suited for the more adventurous traveler, the charm of the camp lies in its tranquil and intimate atmosphere, capturing the romance of a bygone era.

Today it is time to bid farewell to Namibia. You will be driven to the local airstrip for a flight to Windhoek International Airport in time to connect with your departing flight home.

For more information on the Visions of Namibia: Pioneering Initiatives in Conservation email info@extraordinaryjourneys.com