I heard them before I saw them. Trumpets boomed in the distance as if setting the soundtrack to sunset. I looked out over the watering hole, which shimmered and reflected the sky like a golden mirror. The water’s surface rippled as a small flock of birds touched down on the water.

A few minutes later, meandering lines of elephants appeared. After a long day spent under the warm sun, it was time for a drink. Mischievous calves scampered ahead of the adults, their trunks up and blaring. They ran from family member to family member with bursts of energy while their elders trundled ahead. Everyone met at the water.

Impalas, zebras, kudus, painted dogs, hyenas, warthogs, buffaloes, and baboons also appeared—and disappeared—depending on who else was at the muddy shoreline. The trees and plants surrounding the watering hole rustled as smaller animals scurried beneath the underbrush. Earlier that day, we’d seen crocodiles sunning themselves on the bank. In the cool evening air, they lurked underneath the surface.

Hwange National Park, the largest national park in Zimbabwe, is home to the Presidential Elephants of Zimbabwe, a super-herd of over 450 elephants formed by around 20 close-knit families. The herd was named and given protection against poaching in 1990, and their conservation status has allowed tourists to admire them inside park grounds on photo safaris.

While the Presidential Elephants of Zimbabwe are perhaps the most famous super-herd in the country, they are just a few hundred residents of the nearly 30,000 elephants estimated to be freely roaming around the park. This makes Hwange National Park one of the best places in the world to spot African elephants in their natural habitat.

While I was excited to see one or two elephants, watching tens of them in front of me drink so gracefully was surreal. A few elephants broke away from the rest of the herd at the watering hole and marched closer to my camp. They slowly shifted from one side of their body to the other, panning through the dirt in search of minerals. When their long, elegant trunks exhaled into the ground, clouds of dust wafted into the air and sparkled. It was hard to believe that these giants, who easily communicate from miles apart, could be so quiet.

During the dry season in Zimbabwe, animals in the park oftentimes struggle to find enough water, especially if the watering holes they’d once relied on silt over. Conservation-minded resorts and bush camps, like African Bush Camps Somalisa Camp, have a watering hole on the property to provide respite for thirsty wildlife. This also allows travelers to witness wildlife up close without impacting their behavior.

Days are often spent exploring the park on foot, in a 4WD vehicle, or on the water. However, there’s a large chance that your most intimate encounter with these creatures will be back at camp near the watering hole, where you can witness wildlife up close with a chilled drink in hand. It creates a feeling of being embedded into the park, rather than visiting as a distant onlooker. 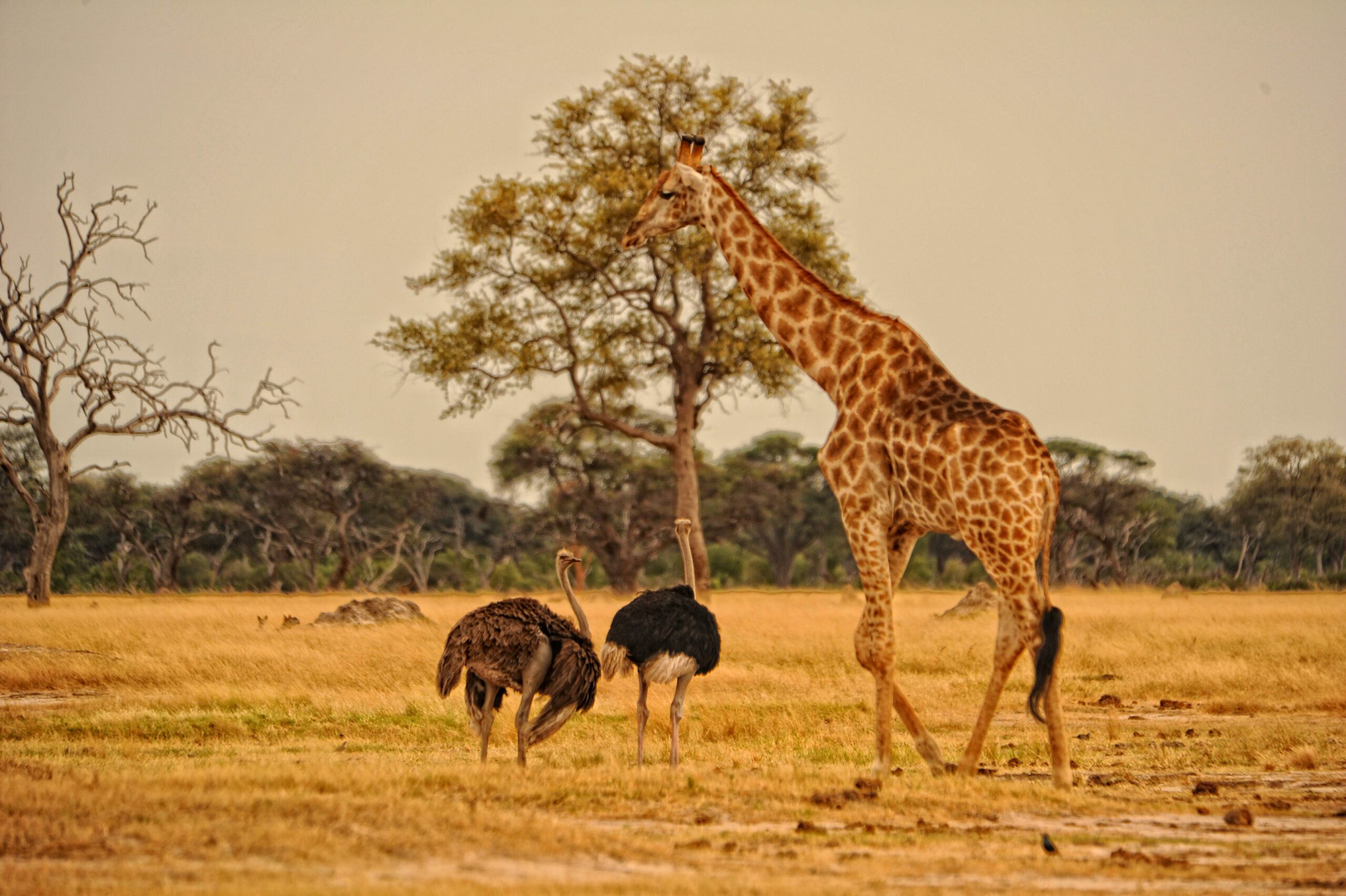 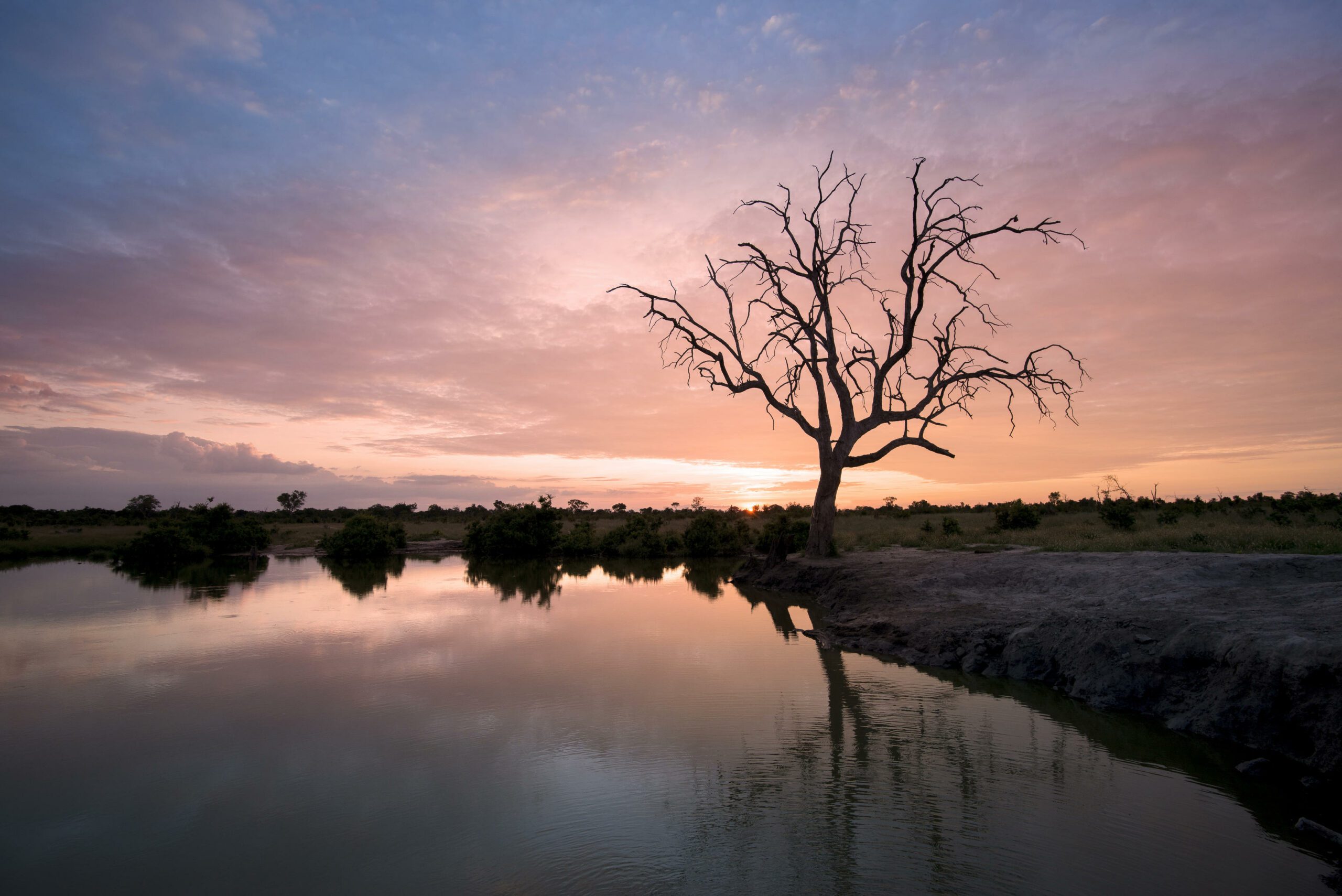 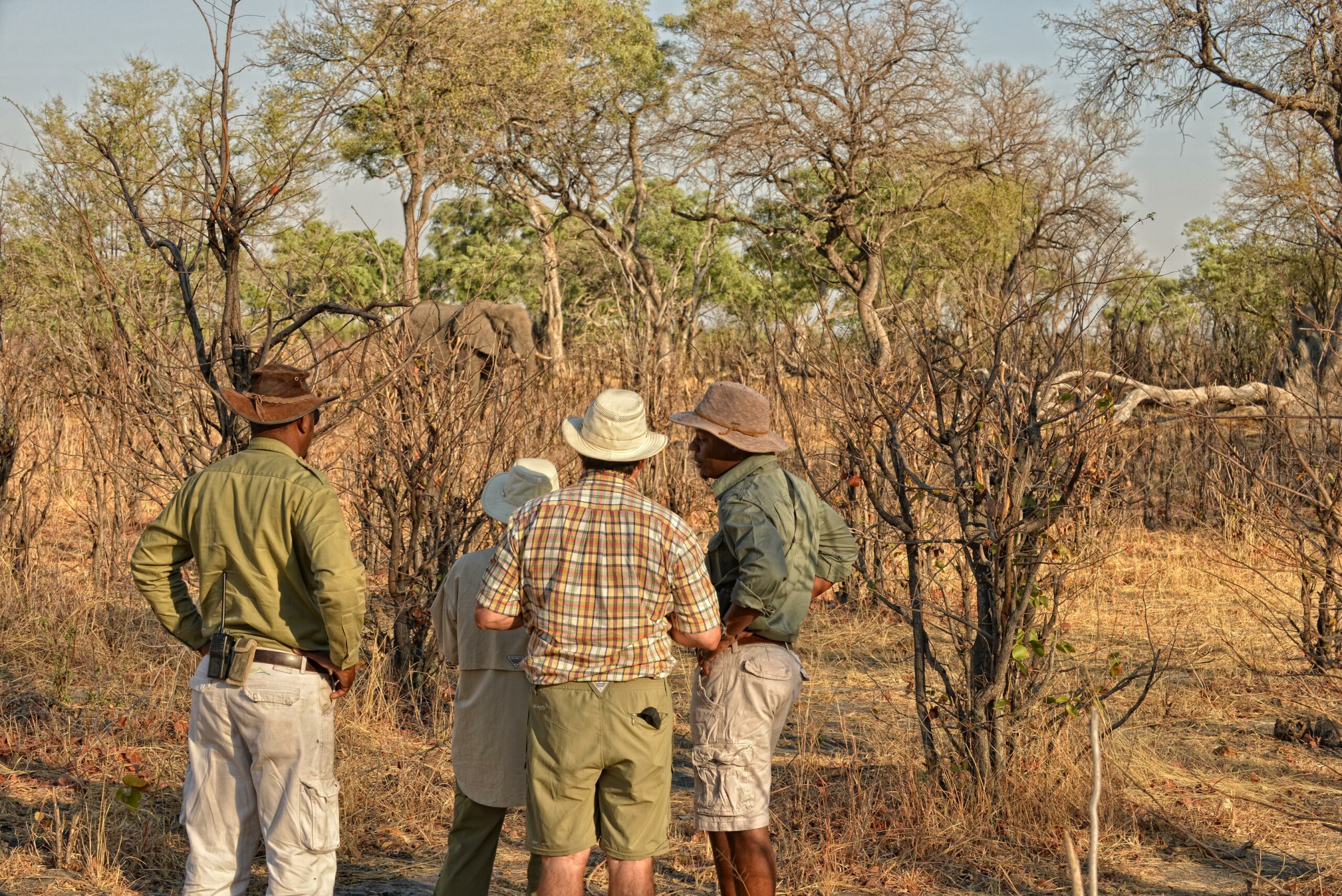 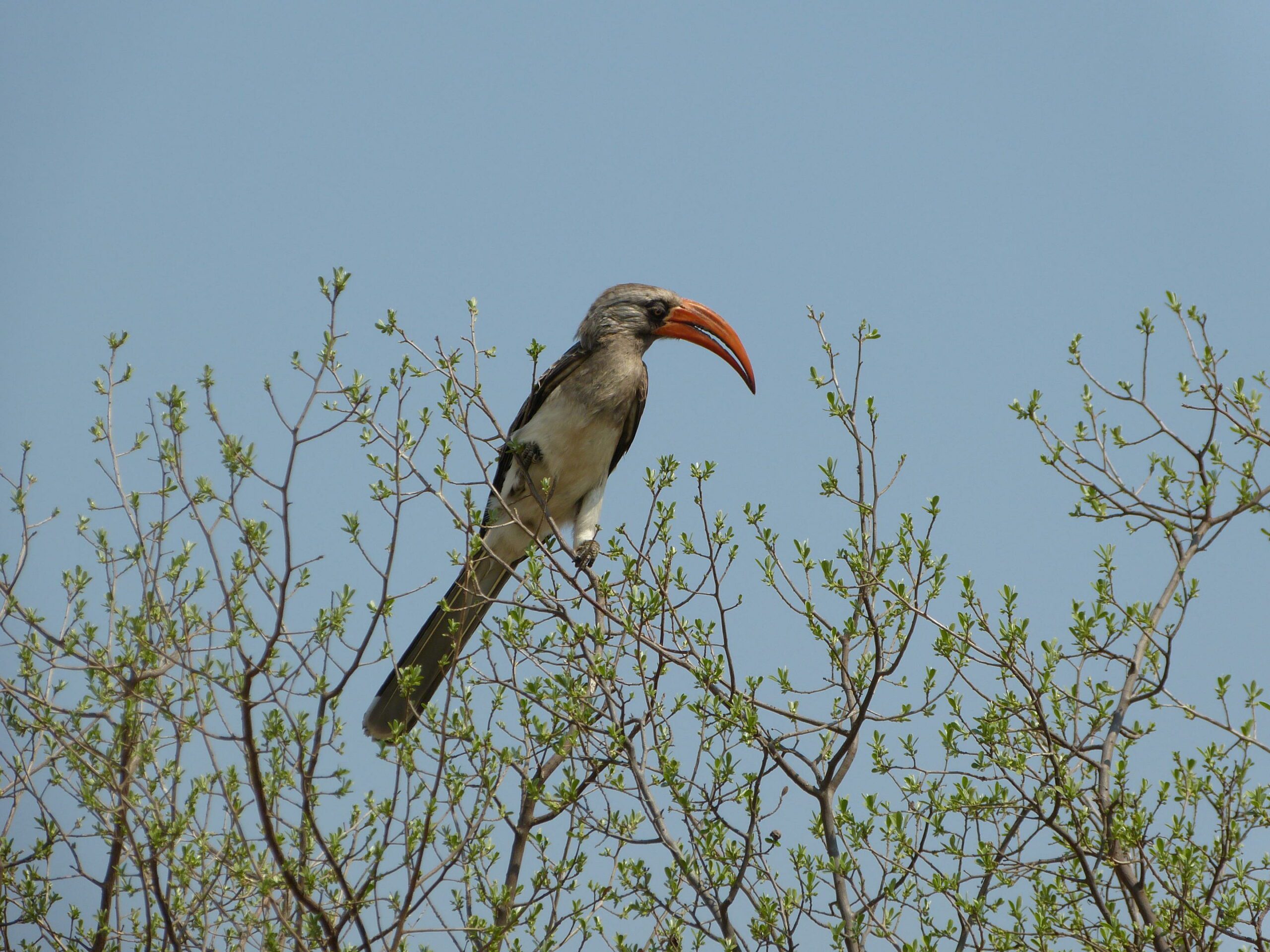 The morning after that first elephant encounter, I woke up two hours before sunrise from excitement. My guide and group would be departing shortly after dawn to venture on a game drive through the park. As I climbed into the Jeep, I wondered what we could possibly see that could top the experience of witnessing so many elephants gather at dusk.

The Jeep rumbled to a start. I planted one hand firmly on the handlebar and used my other hand to navigate the settings of my camera. We drove a few minutes under a rose-tinted sky until we came upon a pack of African painted dogs stalking a single kudu, a species of antelope. The dogs had large round ears and calico hides that looked as if they’d been designed by Jackson Pollock. The dogs yapped at the heels of the kudu, who bolted ahead and rested until the pack caught up with it again. We left the dogs to their hunt and drove deeper into the park. Stretches of grasslands gave way to a forest of acacia trees, and it felt like we’d entered another world.

Ahead on the dusty road, we spotted the silhouette of an elephant. Sensing our presence, she raised her head and looked towards us. An elephant calf emerged from her shadow. They shuffled across the road and into the trees. But as we neared, more elephants appeared and soon we were surrounded by a family of 15 elephants—three of them youngsters. The little ones never strayed too far from the protection of an elder. The matriarchs kept a watchful eye on our Jeep, seemingly deciding that we were friends rather than foes. I wondered if these same elephants would make their appearance back at camp, or if they had reservations at another watering hole for the evening.

The magic of Hwange National Park cannot easily be put into words, and there’s no photo that conveys what it’s like to be near a herd of animals as large and intelligent as African elephants. The park is also home to rhinos, hippos, leopards, cheetahs, lions, giraffes, buffaloes, and nearly 100 other mammals, all majestic. Birders will also find the park a haven for tree dwellers, and it’s wise to look up as often as you remember to.

What to know before you go

The best time to visit Hwange National Park is during Zimbabwe’s dry season from late June to October. This is when you’ll have the highest chance of seeing the park’s animal residents, as they can almost often be found near watering holes for a drink. Dry, sparse vegetation also makes it easier to spot animals in densely forested areas. Most of the park’s largest pans are pumped with water—a resource that tourism dollars support. Some bush camps close during a few months of the wet season, from January to March, due to inclement weather and potential road closures.

On safari and at camp, it’s best to stay quiet and make only slow movements whenever animals are around. This will not only increase your chance at getting a close view of the animals, but it will also prevent them from becoming stressed. Pack lightweight clothing that’s easy to layer in neutral colors to protect yourself from the elements during your journey.

How to get to Hwange National Park

There are two domestic airports, Victoria Falls Airport and Hwange Airport, that are within a few minutes’ drive from Hwange National Park bounds. You can easily combine a trip to the park with a trip along the Zambezi River or to Victoria Falls.

Our favorite itineraries in Zimbabwe 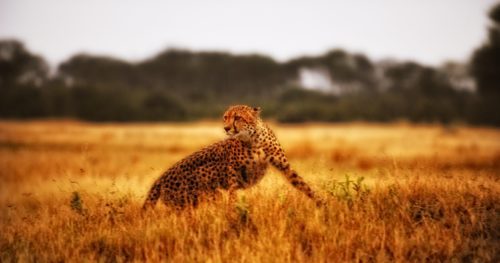 Ultra-Luxury Safari to Zimbabwe and Botswana

Unique and diverse experiences across Zimbabwe 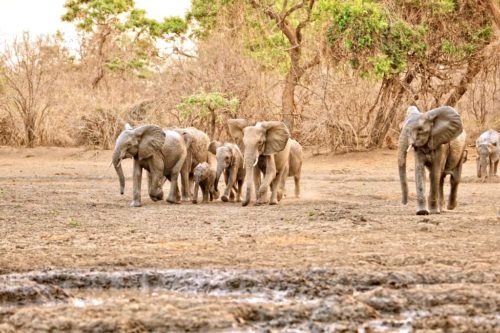